In structural engineering, a modal analysis uses the overall mass and stiffness of a structure to find the various periods at which the structure will naturally resonate, along with the frequencies of vibration of the structure. In RISA-3D, the modal analysis is a prerequisite to the response spectra analysis, which uses these frequencies to calculate forces, stresses and deflections in the model.

When conducting a modal response spectrum analysis, building codes (including ASCE 7) require that a sufficient number of modes be used to understand the overall response of the structure. While it is not always possible to achieve full participation (a case where 100% of the modal mass is accounted for) the code does at minimum require that a modal analysis shall include a minimum number of modes in order to obtain a combined mass participation of at least 90% of the actual mass in each orthogonal horizontal direction (X & Z directions in RISA-3D). 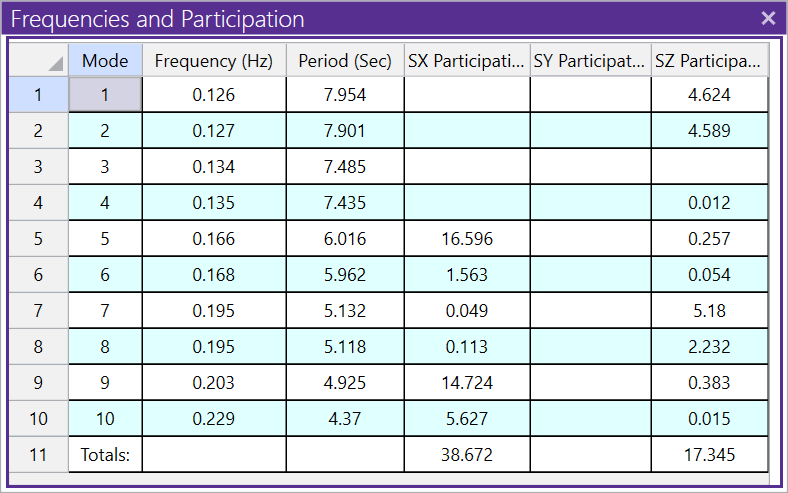 Increase the Number of Modes

The simplest and most direct way to improve mass participation is by increasing the number of modes used in the dynamic analysis. Doing so will also increase the overall time it takes to complete the dynamic solution. When increasing the number of modes, you may notice that many of the modes have little or no mass associated with them. These “local modes” can cause further issues in the model if they aren’t dealt with accordingly.

Local modes are not immediately obvious when looking at the frequency or numeric mode shape results. However, they are easy to spot when using the mode shape animation feature found in the Animate section of the View toolbar.

Evaluating the animation for Mode Shape 4 (from the above table) we see that a local mode exists where only a small portion of the structure in one area is vibrating.

A localized mode like the one shown above can make it difficult to get enough mass participation in the response spectra analysis (RSA), since these local modes don’t usually have much mass associated with them. Quite often, localized modes are due to modeling errors (erroneous boundary conditions, members not attached to plates correctly, etc.). If you think this may be the case, running the Model Merge tool found in the Modify tab should be done before taking further action.

Another option for braces that are the cause of local modes is to eliminate their mass entirely by utilizing a weightless material. In this case no mass would be assigned to the X-brace intersection and it would not participate in the eigensolution. 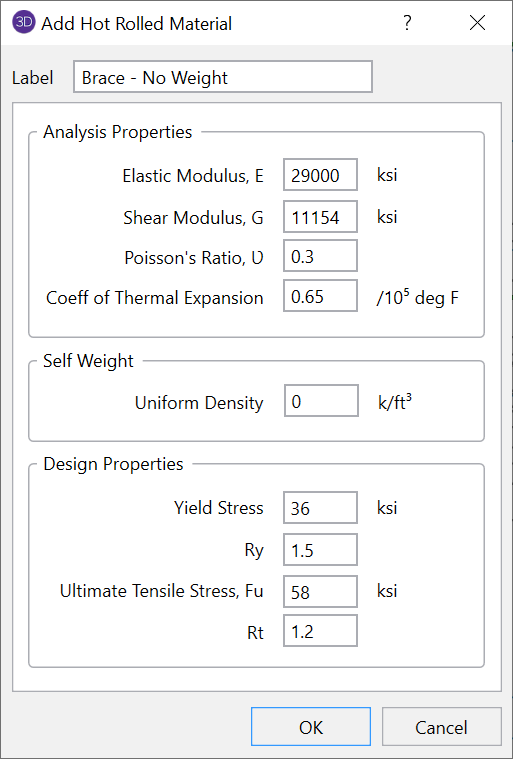 Yet another option for braces requires the deletion of the node at the crossing of X-braces. If there is no node at this location there is no degree of freedom. This location will not likely be crucial for a dynamic solution anyway, so eliminating the node eliminates a flexible mode with minimal mass participation.

Another cause of local modes is including the self-weight in models with walls or horizontal diaphragms modeled with plate/shell elements. These walls and floors can have many modes that will tend to vibrate out-of-plane like drums, but will have very little effect on the lateral seismic response of the structure. For cases like this it will often be better to switch from the standard or accelerated dynamic solvers to the Ritz Vector dynamic solver because Ritz vectors are inherently biased to avoid modes with little mass participation in the desired direction. 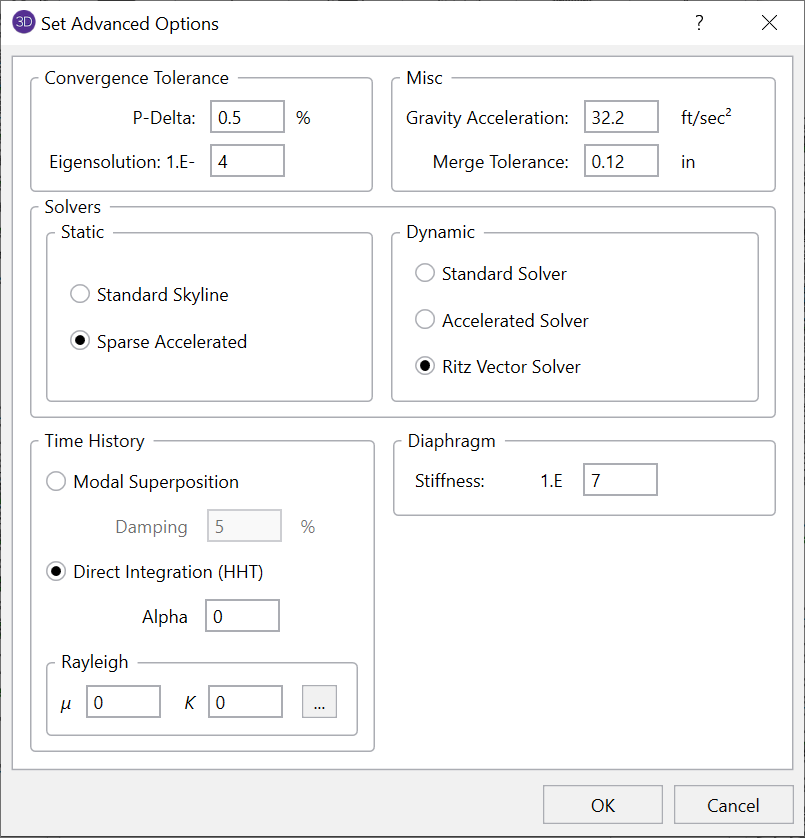 For more information about the Ritz Vector Solver, review the article listed below:

Users can also utilize a structures "Residual Mass" to help improve the overall mass participation. Doing so is appropriate for structures that have a large amount of mass at the lower levels of the structure and where the mass is associated with very rigid modes. These modes may be so rigid that it may not be necessary to calculate the actual eigen modes. Instead, their response can be estimated accurately (and much more efficiently) using some simple estimates of their response. This is achieved by determining what mass has been activated already with the currently solved eigen modes. This tells the solver where “residual or missing mass” is that has not been activated. If one applies a response spectra acceleration equal to the zero period acceleration to this mass, then this should provide a reasonable estimate of the residual or missing mass. For a more detailed explanation of residual mass and how it is utilized within RISA-3D, visit the article listed below.

Improvements to Solid Elements in RISA-3D

Instabilities in RISA-3D with Flexible Diaphragms

In a model that contains both RISAFloor and RISA-3D data it is possible to define your diaphragms as either flexible or rigid for lateral design. You can do this from the Diaphragms spreadsheet in either program: Rigid diaphragms will create a rigid link mesh in RISA-3D that makes the diaphragm act as a rigid body. There is a physical effect on your model that affects the analysis by locking all nodes at the diaphragm level together. Flexible diaphragms act solely as a load attribution mechanism. The program calculates the tributary area to the lateral force resisting elements and applies the load to the collectors. However, there is no physical effect on the analysis. The flexible diaphragm behavior can cause lateral stability problems with your model. Here is an example where this could be a problem: In this scenario our braced frames in our flexible diaphragm model have no out-of-plane stability provided, as the diaphragm has no physical effect on the model. When we solve this model we will receive instabilities in the solution. To handle this scenario we will use very small spring boundary conditions in the out-of-plane directions on the frames. These are dummy boundary conditions of course. Because…

What is a Rigid Link in RISA-3D?

A rigid link is a member element in RISA-3D that can be used for many advanced modeling procedures. It is so useful that it is included as one of the default member Section Sets, as you’ll see below. On the General tab of the Section Sets spreadsheet there is a default “RIGID” Section Set that uses the “RIGID” material. You can see the cross-sectional properties make the section very rigid. You can also open the General tab of the Materials spreadsheet to see the material properties assigned to the “RIGID” material. It has very stiff material properties with zero density so that it does not create any erroneous additional self-weight. As you can see from the properties above, a dummy member is a very stiff member which can be used to help transfer forces from one point to another. This can be useful for a number of advanced modeling techniques in RISA-3D, such as offsetting elements or modeling composite behavior. A great example of how to use Rigid Links is Offset Connections. Another use for these rigid link members is in RISA-3D rigid diaphragms…