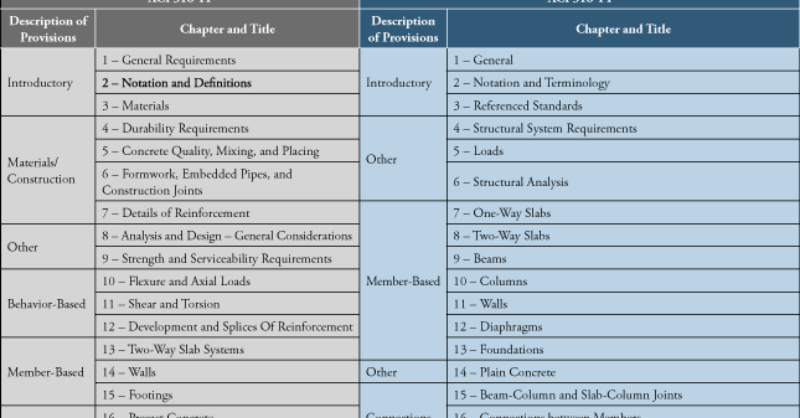 The new ACI 318-14 code has been implemented into RISA-3D V14, RISAFloor V10, and RISAFoundation V8. One of the big changes between the ACI 318-11 and the ACI 318-14 was to minimum flexural reinforcement for one-way and two-way slabs, as well as foundation elements.

In many cases this has the effect of increasing the required reinforcement in these elements. Here we will discuss why.

In this code the flexural minimums are considered in Section 10.5. Sections 10.5.1 and 10.5.2 are where the minimum flexural reinforcement calculation is looked. For common values of reinforcement and concrete properties this would result in a rho = 0.0033. In Section 10.5.3 there is an additional provision that allows you to disregard 10.5.1 and 10.5.2 as long as the area of steel provided is at least 1/3 greater than required by analysis.

This code re-arranged it’s sections to each element type and thus updated/clarified the language for each element.

For 60 ksi reinforcement this would result in rho = 0.0018. However, there is no exception here for the 1/3 greater than analysis. This is the same provision for both one-way and two-way slabs.

Each of these sections gives a reference to either Chapter 7 or Chapter 8. For this reason it was assumed that the minimum flexural reinforcement changes were applicable to most foundation elements.

When using the ACI 318-11 code it was common that the flexural reinforcement minimums were omitted because of the exception in Section 10.5.3. The 4/3’s*Asrequired or Asmin (temperature and shrinkage) would generally govern.

When using the ACI 318-14 code, however, the exception is not allowed and rhomin = 0.0018 is required for any tension face for the elements referenced above.

Thus, for a member in both positive and negative bending rhomin = 0.0018 would need to be met on both faces of the element and thus causes an overall larger amount of reinforcement.

This change is applicable to:

The new ACI 318-19 code has been implemented into RISA-3D v19, RISAFloor v15, and RISAFoundation v13. One of the biggest changes between the ACI 318-14 code and the ACI 318-19 code is the shear contribution provided by the concrete, Vc. ACI 318-14 In ACI 318-14, a simplified equation for the calculation of Vc could be used unless there is axial force present in the member. The area of shear and flexural reinforcement in the cross section was not a consideration when determining the shear strength contribution of concrete using the simplified equation. ACI 318-19 Now, in ACI-318-19, the calculation of Vc is dependent on whether the area of shear reinforcement provided, Av, is lesser or greater than the minimum area of shear reinforcement required, Av,min. When Av > Av,min, the axial load and the flexural reinforcement ratio are included in the calculation of Vc. ACI allows us to use the larger of the results from equation (a) and (b) in the table. In RISA-3D detail report, this calculation will be presented in the shear design tab: When Av < Av,min, ACI 318-19 introduces a new variable, the size effect modification factor, λs. Experimental tests have indicated that the shear strength…