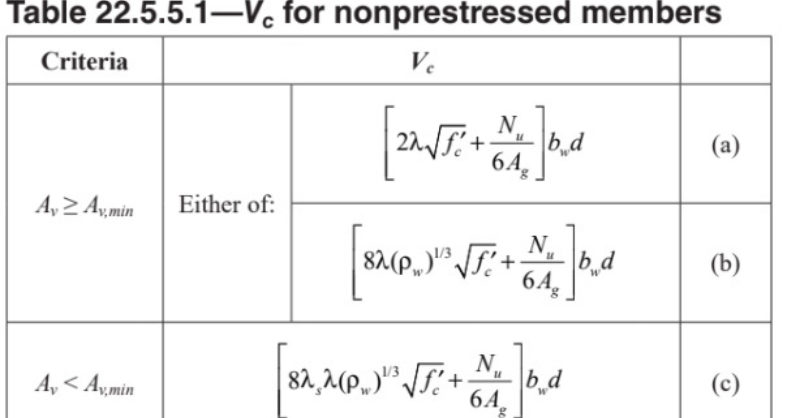 In ACI 318-14, a simplified equation for the calculation of Vc could be used unless there is axial force present in the member.

The area of shear and flexural reinforcement in the cross section was not a consideration when determining the shear strength contribution of concrete using the simplified equation.

When Av > Av,min, the axial load and the flexural reinforcement ratio are included in the calculation of Vc. ACI allows us to use the larger of the results from equation (a) and (b) in the table. In RISA-3D detail report, this calculation will be presented in the shear design tab:

In summary, this change is applicable to the following:

Cold-formed steel framing is a durable, reliable and cost-effective option for low-rise and mid-rise building projects. With the release of RISA-3D Version 19 and RISAFloor Version 15, cold formed steel (CFS) walls are now available for analysis and design. Walls that have been designated as lateral in RISAFloor will be transferred into RISA-3D when utilizing the Director feature. Currently, CFS walls are only available when the AISI S100-16: ASD or LRFD code is selected from the Model Settings. To draw CFS walls in RISA-3D, simply choose CFS from the Wall Material dropdown menu in the Properties Panel. The design for the CFS walls will follow the criteria assigned in the Design Rules. The Wall Design Rules may be modified through the Wall Design Rules spreadsheet, or through the Wall Definition Editor by selecting the ellipsis to the right of the Design Rule in the Properties Panel. CFS wall sheathing material options include Wood Structural sheathing, Steel Sheet sheathing, Gypsum board panels and Fiberboard. The sheathing material may be selected in the Wall Design Rules spreadsheet or within the Wall Panel Definition Editor. The program will design the optimal sheathing size based on the thickness requirements and shear demands. The Segmented…