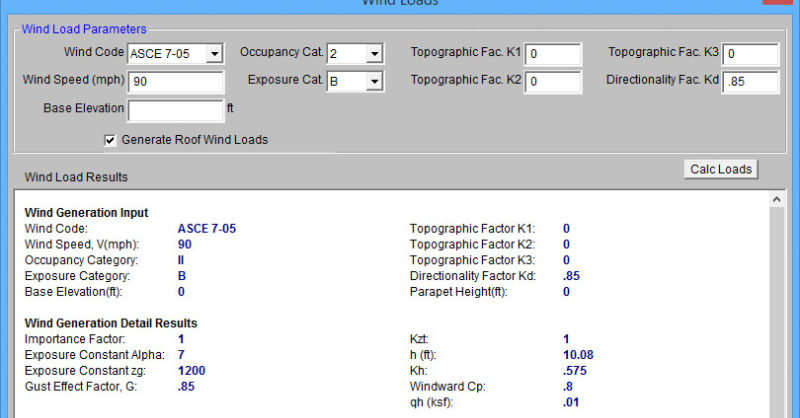 RIAFloor designs the gravity system and then integrates with RISA-3D to design the lateral system. Only the lateral members are taken from RISAFloor over to RISA-3D. The loading is automated in this integration so one of the most common questions is: what loads are transferred when switching from RISAFloor to RISA-3D? Below is the brief explanation to answer this question.

Gravity Loads: The lateral members that become part of the RISA-3D model bring over their gravity loads. This also includes the beam reactions from the gravity only members that were not transferred in to RISAFloor. The load categories in RISAFloor are automatically converted into Basic Load Cases in RISA-3D.

The exception to this are the Load Categories that deal specifically with construction loads (DL Const and LL Const), which are not converted.

Wind Loads: The wind loads are automatically calculated as the RISAFloor model gets integrated into RISA-3D. The wind load parameters are located in the Wind tab of the Global Parameters in RISAFloor. However, these settings may also be changed when the wind load dialog pops up when transferring to RISA-3D: 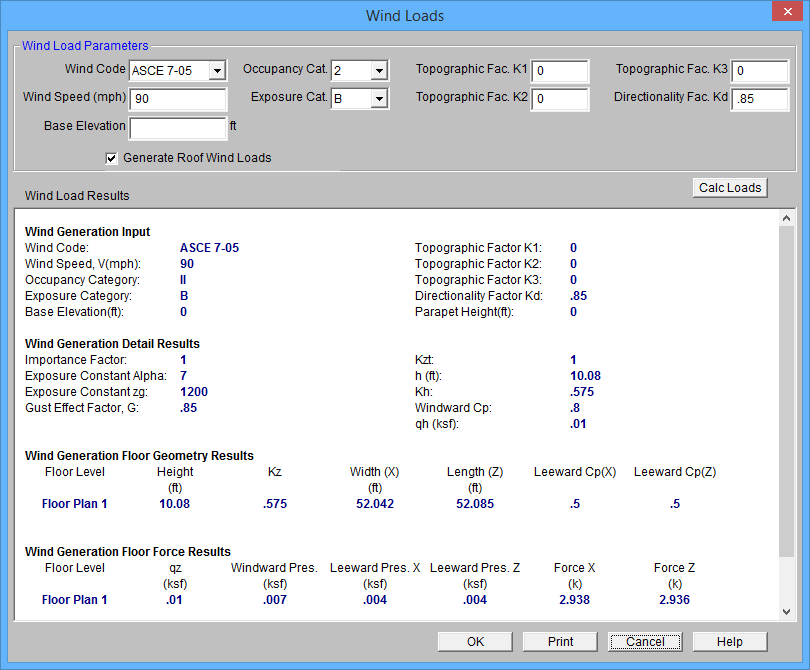 The option to generate roof wind loads are only present in RISA-3D models that are integrated with RISAFloor.

Seismic Loads: The seismic weight used to calculate the seismic load generation from RISAFloor to RISA-3D includes the self-weight of all members associated with that particular floor diaphragm. 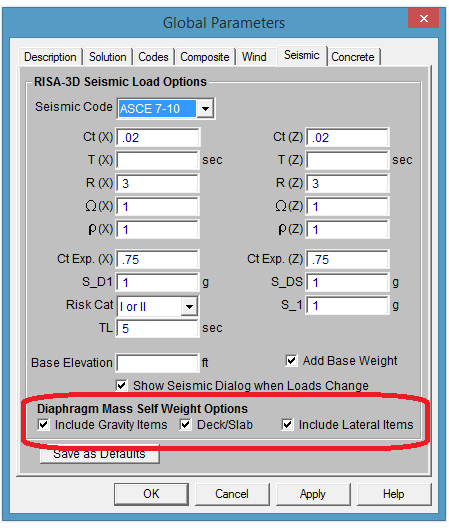 The seismic self weight parameters are located in the Seismic tab of the Global Parameters in RISAFloor. Any element located outside of the diaphragm edges will not be considered for seismic weight. Walls partially located within a diaphragm will contribute only that applicable portion to the total self-weight.

The Dyn Load is also included in seismic weight.

With the Deck/Slab option turned on in the Global Parameters, the Super DL is also included in the Seismic Weight. Any other super-imposed dead loads are not included in the seismic weight (PreDL, PostDL, or Const DL).

Similar to wind loads, the seismic parameters are located in the Global Parameters under the Seismic tab in RISAFloor. However, these can be edited when switching from RISAFloor to RISA-3D in the Seismic Loads dialog box that pops up: 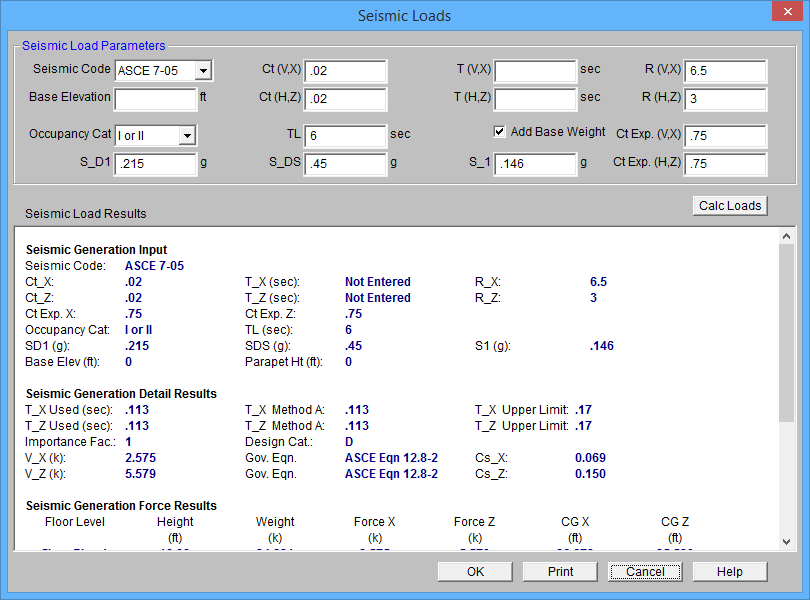 What is a Semi-Rigid Diaphragm?

Instabilities in RISA-3D with Flexible Diaphragms

In a model that contains both RISAFloor and RISA-3D data it is possible to define your diaphragms as either flexible or rigid for lateral design. You can do this from the Diaphragms spreadsheet in either program: Rigid diaphragms will create a rigid link mesh in RISA-3D that makes the diaphragm act as a rigid body. There is a physical effect on your model that affects the analysis by locking all nodes at the diaphragm level together. Flexible diaphragms act solely as a load attribution mechanism. The program calculates the tributary area to the lateral force resisting elements and applies the load to the collectors. However, there is no physical effect on the analysis. The flexible diaphragm behavior can cause lateral stability problems with your model. Here is an example where this could be a problem: In this scenario our braced frames in our flexible diaphragm model have no out-of-plane stability provided, as the diaphragm has no physical effect on the model. When we solve this model we will receive instabilities in the solution. To handle this scenario we will use very small spring boundary conditions in the out-of-plane directions on the frames. These are dummy boundary conditions of course. Because…

RISAFloor now has the ability to model a Semi-Rigid, Rigid or Flexible diaphragms to distribute lateral loads. For more information about the different diaphragm types, click on the link below. Link: RISA Help: Diaphragms On a beam supported floor, you create a diaphragm edge by clicking this icon: and then choose the Semi-Rigid option. The semi-rigid diaphragm is modeled using plates from the General- Material spreadsheet. The thickness in combination with the material stiffness should be based on the lateral stiffness you expect from your diaphragm. Existing models can be modified by changing the diaphragm type in the Diaphragms spreadsheet. In RISA-3D, the diaphragm will provide only “In-Plane” stiffness. In other words, stiffness in the direction of the lateral loads not stiffness for gravity loading. The Semi-Rigid diaphragm will be automatically submeshed in RISA-3D. After a solution is present, you can view the submesh for reference (Model Display Options- Diaphragms tab)…