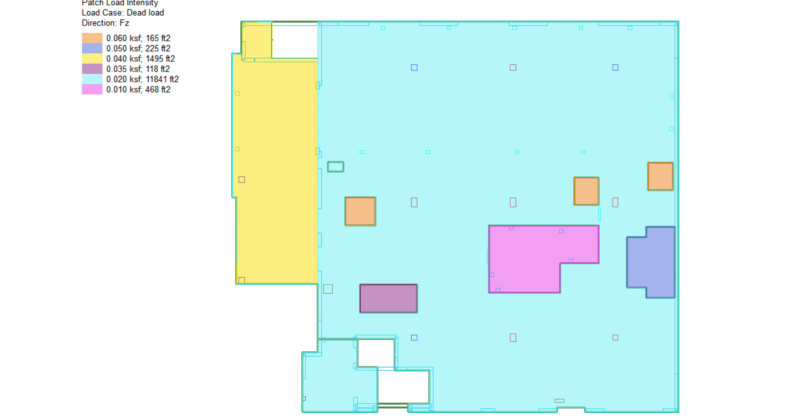 Ability to Colorize Loads in ADAPT-Builder

In ADAPT-Builder v21.0.1 the Colorize Grid has been improved to allow for the coloring of loads. You can colorize point loads, line loads, and area loads. For area loads the colorize grid offers a load intensity map to show the total applied load in a given area per load case. For point loads the program will use a color range to represent load magnitude values. The program will also list the colored loads by magnitude for easy selection and modification of loads. 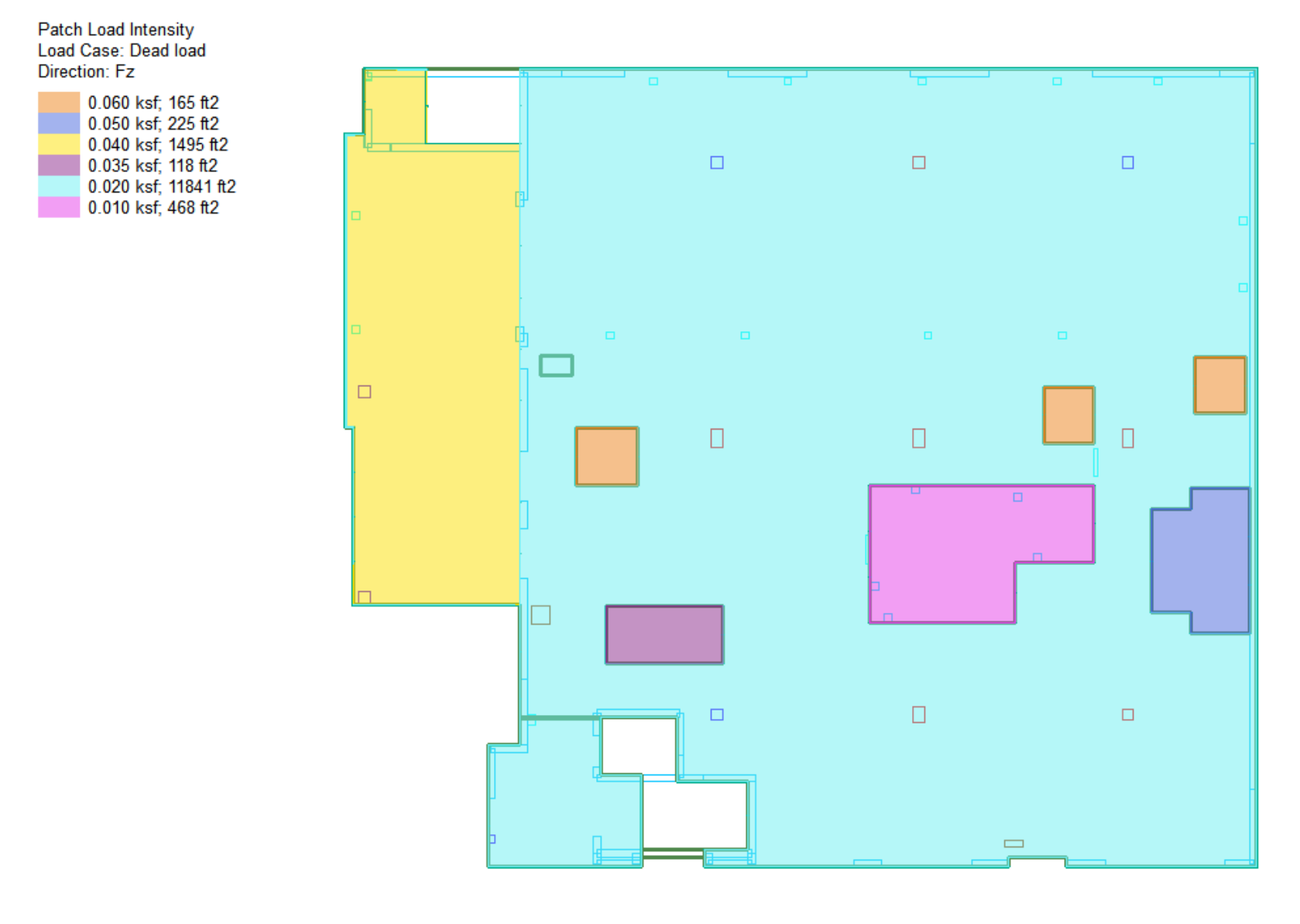 Once applied loads exist in a model the "Colorize Grid" can be used to differentiate loads based on their magnitude. In the colorize grid, select the desired load type and load case you wish to view and also select the load type you want to colorize. The choices are point load, line load, and patch load.

This is example, we are first choosing to colorize the "Point Loads" found in the model. 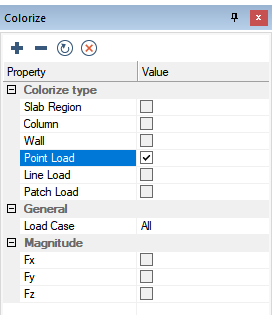 Next, users can select the load case (in this example, Dead Load) required using the Load Cases dropdown. The dropdown will include any and all load cases the exist in the model. 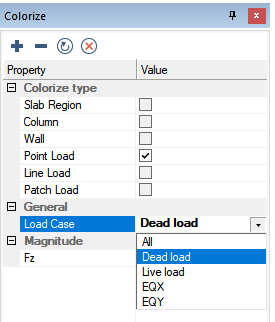 Lastly, in the Magnitude section of the Colorize Grid, users can select the direction of the applied loads to be colorized. In this example, the Fz direction is chosen. Other force directions (Fx and Fy) as well as moments are available as well. 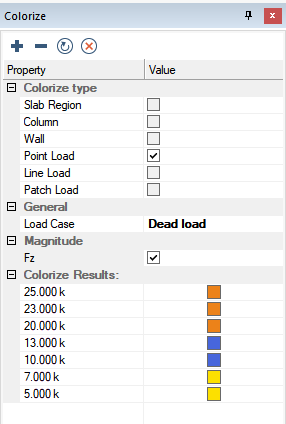 With these selections made, the program will display the colorized loads in plan view. Since there could be a large number of point loads in the model the loads are colored in groups based on the number of loads and the difference in magnitude between the loads in the model. Additional information for the load magnitude is shown in the Colorize Grid as well. 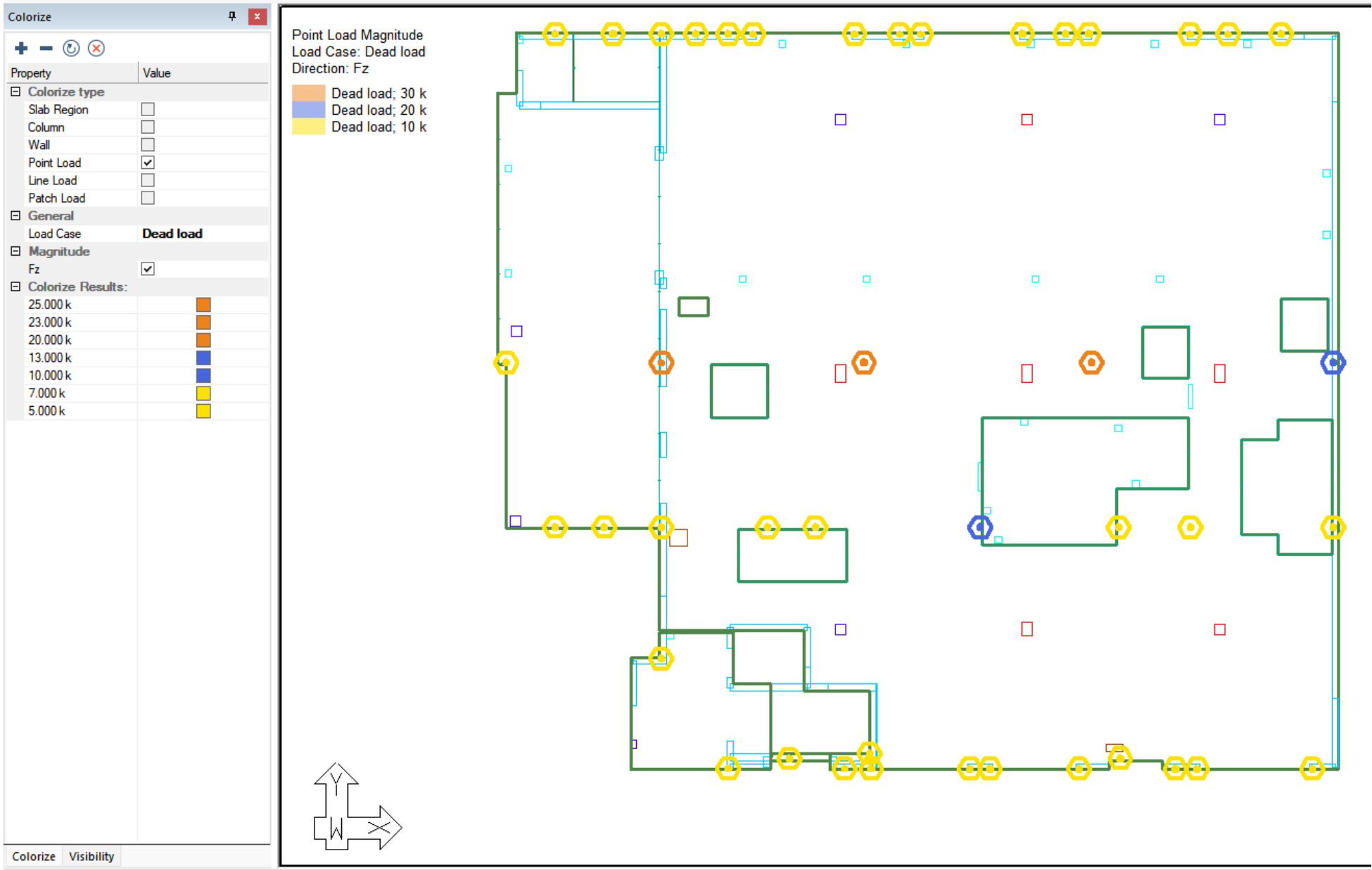 Users can also select a load magnitude in the Colorize Results portion of the Colorize Grid to select the load. With the loads selected the user can move to the Properties Grid and make changes to the load if needed. 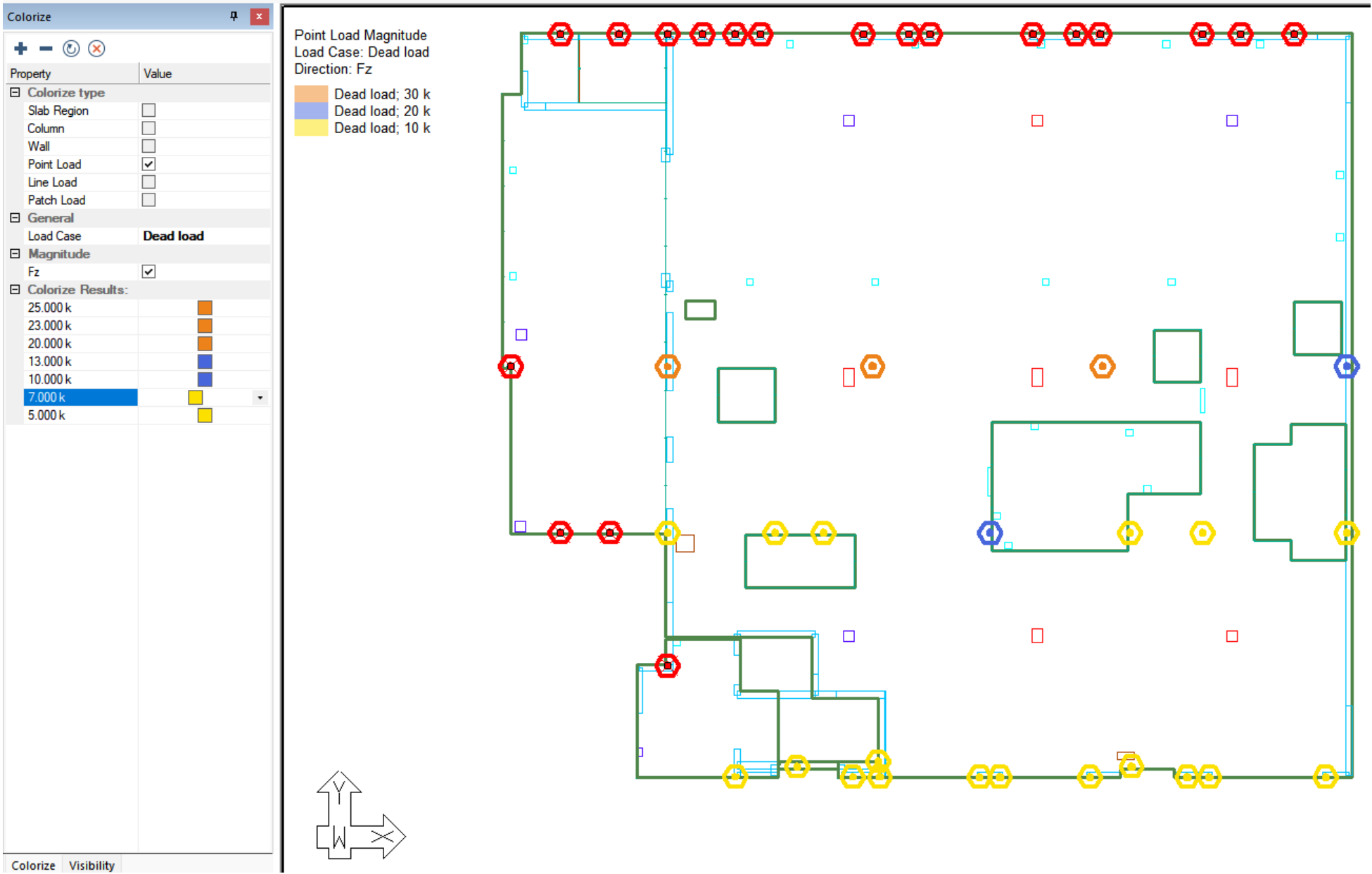 If a user chooses to colorize line or patch loads instead of point loads the program will not group the loads based on magnitude, but will show each load colored based on their specific magnitude as shown below. 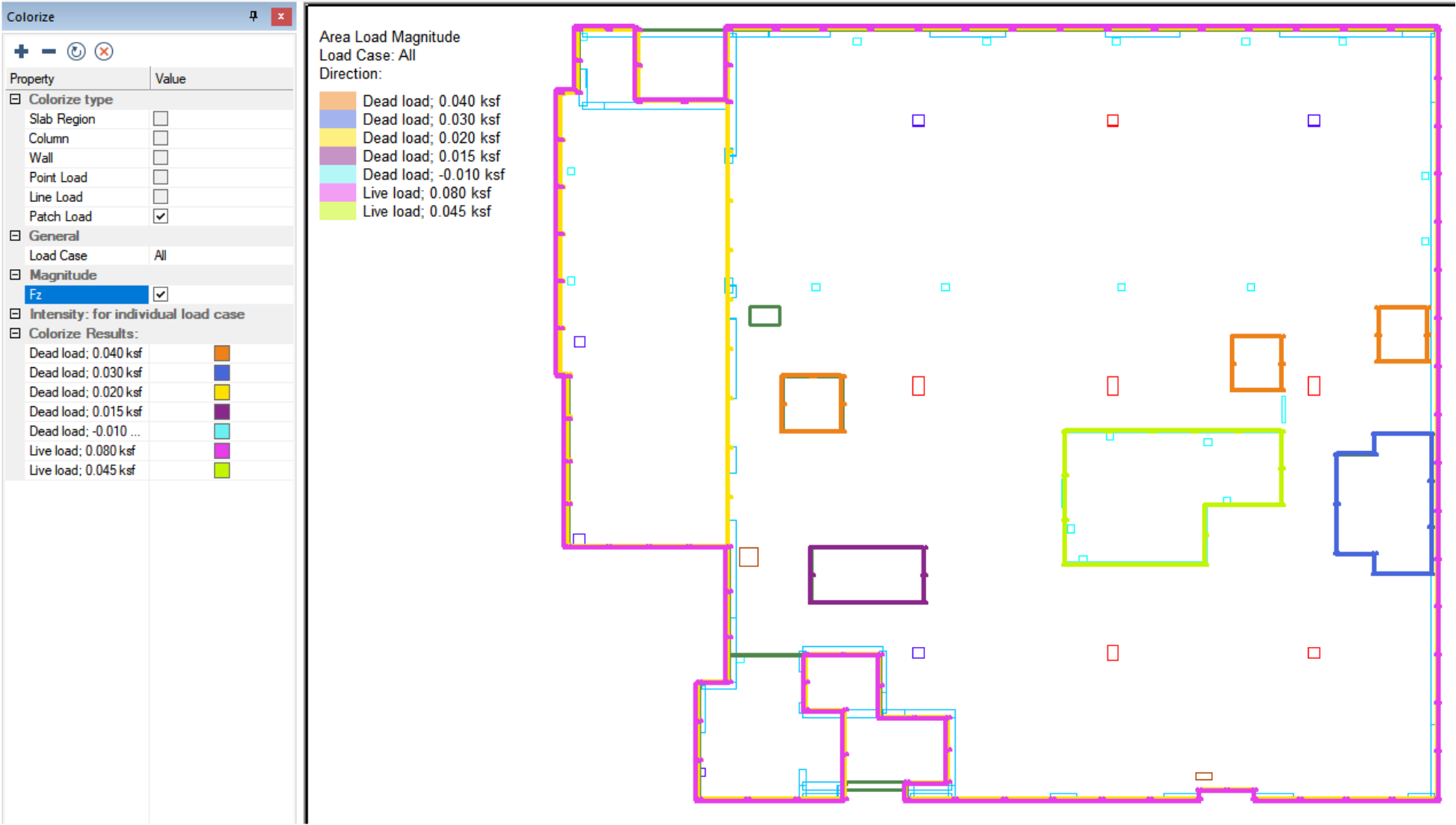 Colorizing the magnitude of patch loads will only color the load based on its magnitude. However, since patch loads in ADAPT-Builder are additive, colorizing the magnitude is not always indicative of the total load applied in the area. For area loads, the program includes the option to colorize the loads based on load intensity. To colorize patch loads based on intensity, users must first choose the individual load case required. Once the load case is selected, the ability to select Intensity: for Individual Load Case option will be unlocked. 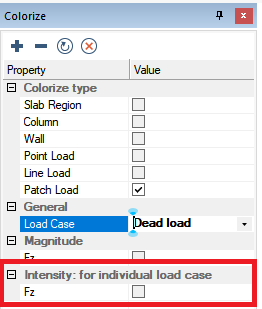 If the colorize by intensity option is selected, the program will shade the slab area a different color based on the total magnitude of applied patch loads within the area. The total magnitude and its associated color will be displayed in the legend along with the area of slab the load covers. 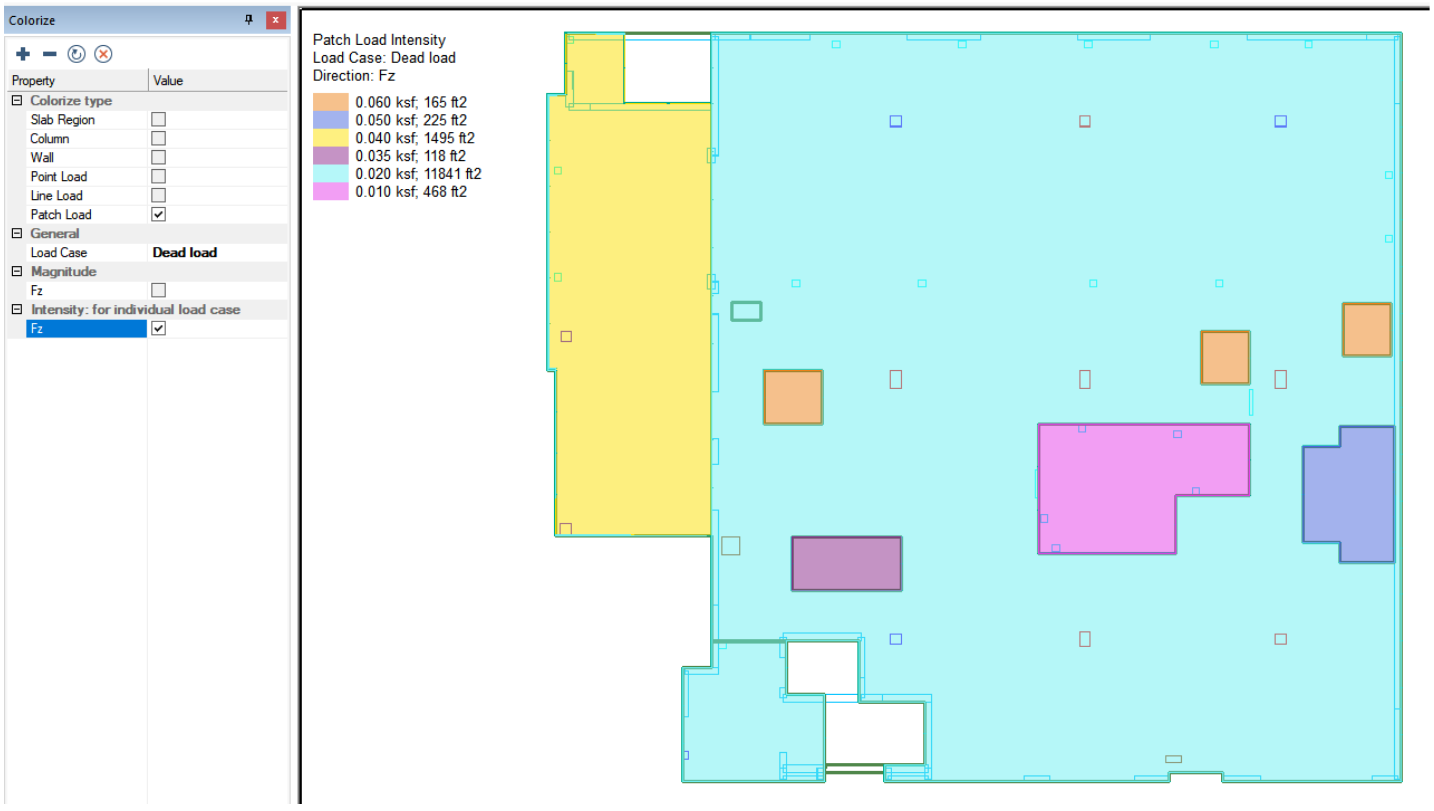 For reporting, users can use the "Take Report Screenshot" option of the Report ribbon to include any of these colorize maps into their report. For more information on colorizing loads in ADAPT-Builder refer to the ADAPT-Builder Help File.

The latest release of ADAPT-Builder (Version 20.0.1) includes improvements to model input, colorization and result display. Colorize Tendon Spans by Shape Users now have the the option to Colorize Tendon Spans by their assigned Span Shape. This improvement greatly improves user efficiency when reviewing tendon profiles to ensure proper modeling of tendons. Creation Mode When modeling a component, the program enters a new Creation Mode, where the user can modify component properties during the modeling process. Creation Mode replaces the use of the Item Properties dialog window to modify properties while modeling, adding more efficiency to the modeling process. Live and Dead Ends for Effective Force Tendons Users can now set the Stressing Ends of Effective Force Tendons. The user has the option to set the Effective Force Tendon anchors as Live:Live; Fixed:Live, or Live:Fixed for visual representation within the model as well as export to DWG/DXF file. Previously this option was limited to Calculated Tendons only. Enhanced Punching Shear Reinforcement Display and Selection Output now includes enhanced the Punching Shear Reinforcement display to reference the Stud/Stirrup Size. Additionally, when selecting the Punching Shear Reinforcement in the Properties Grid the program now displays the Bar Number/Size as well as Stud/Stirrup…

Increased Visibility through Colorization in ADAPT-Builder