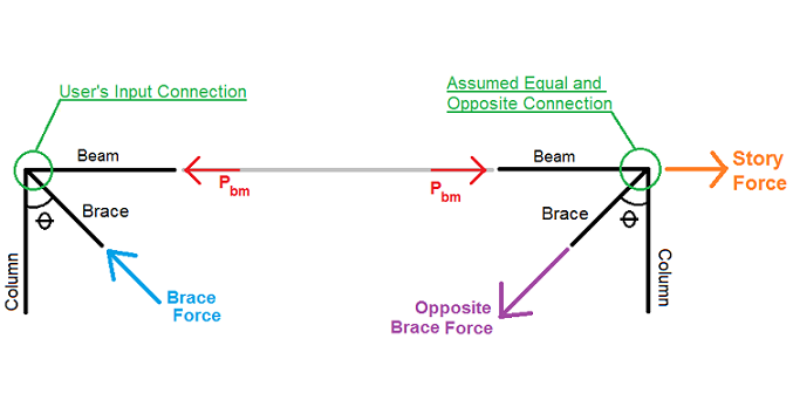 It is possible for seismic (OCBF or SCBF) vertical braced connections to have some limit state code checks lower than those for the same non-seismic connection.

This is due to the assumptions that RISAConnection makes when calculating the axial load in the beam. Non-seismic vertical brace connections only have a single beam axial load input value. Because seismic vertical brace connections require separate frame analyses of the various possible load directions, it is not appropriate to use a single input brace axial load for all load direction cases. Doing so could cause un-conservative results.

The beam axial load calculation is done for each applicable loading direction case. To see the details of these calculations, please see the Seismic Load Distribution on the new Seismic tab of the results report. 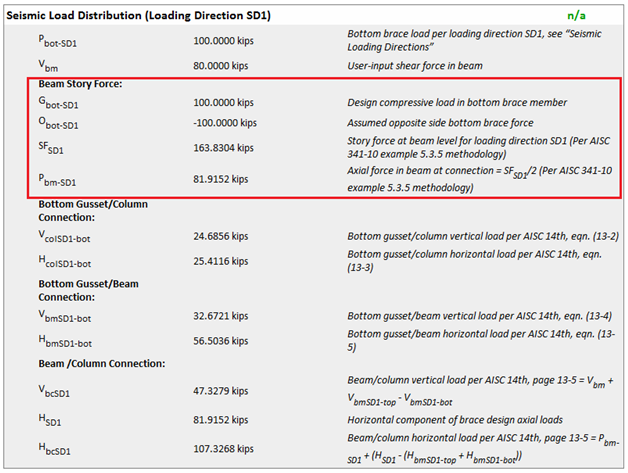 The procedure is based on that used in example 5.3.5 of the AISC Seismic Design Manual. It is determined using simple statics and the following assumption:

The input connection is mirrored on the other side of the bay with an equal and opposite braced connection.

Assuming this assumption, the story force and axial force are calculated as:

How is the Beam Axial Force Used?

This is calculated for each of the applicable loading directions and then the design is done per the governing values; both in tension and compression, for the applicable limit states.

This means that the governing axial and/or resultant forces at the sub-connection interfaces can potentially be lower per the seismic analysis than they are for the same non-seismic connection.

RISA-3D includes the ability to design steel structures for seismic provisions found in AISC 341 and AISC 358 including moment frames and braced frames. For more information, review the video below…

RISA-3D has two ways of automatically generating seismic-related Basic Load Categories (BLCs) which can be later referenced in the Load Combinations (LCs): 1. Creating seismic BLCs (ELX, ELZ, etc) from the Seismic Load Generator 2. Creating seismic BLCs (SX, SZ, etc) from Response Spectra Analysis In addition to the automatic generated seismic loads, users can always draw any loads and add them to seismic load consideration. How to generate seismic loads from the seismic load generators are further discussed here: How to create seismic loads from response spectra analysis is further discussed here: Once the seismic-related Basic Load Categories (BLCs) are created, they can be used in analysis by referencing them in the Load Combinations (LCs). RISA-3D also has Load Combination (LC) Generators that will generator seismic-related combinations based on selected codes. How to use the LC generator is further discussed here: The seismic load categories (ELX, ELZ, etc.) generated from the Seismic Load Generator can also be viewed visually from the load display. The seismic load categories (SX, SZ, etc.) generated from Response Spectra Analysis cannot be viewed visually, but users can check the total base reactions from the joint reaction spreadsheet as a reflection for the applied lateral…

How to Use Seismic Factors in Load Combinations in RISA-3D

RISA-3D now has the ability to define the seismic parameters Rho, Omega and SDS directly into load combinations. If you open the Basic Load Cases spreadsheet and click into the BLC column, the dialog offers the ability to add these values in to factor the load. Here we will see that Rho and Omega can only be used if the Load Category Code is set to a seismic option. Sds can only be used if Dead Load is selected. Once you apply this factor it is automatically taken into account without the use of the Factor column in the Load Combinations spreadsheet. The actual values for these factors are defined in the Seismic tab of Global Parameters. Rho is specified in section 12.3.4 of the ASCE 7-16. Omega is specified in Table 12.2-1. SDS is used for the vertical portion of seismic load and is typically multiplied by 0.2*DL in Section 12.4 combinations…