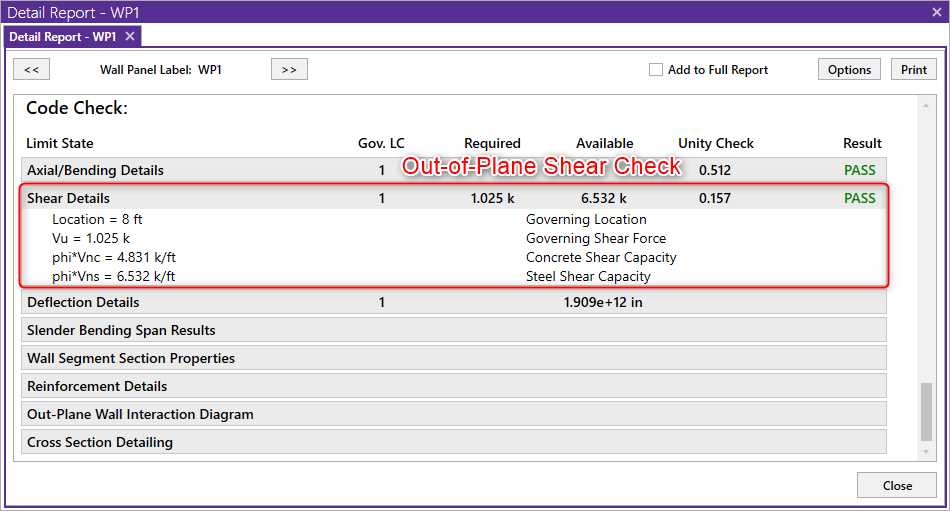 This limit state may cause users to ask the question: “why is the a phi*Vns term listed when no out-of-plane shear reinforcement is present?”

The answer is that when calculating the out-of-plane shear capacity of the concrete wall, RISA-3D considers Shear Friction developed at the crack interface.

When axial tension and out-of-plane shear are applied to the concrete wall, cracks will form across the wall thickness as explained by the simplified force diagram shown below: 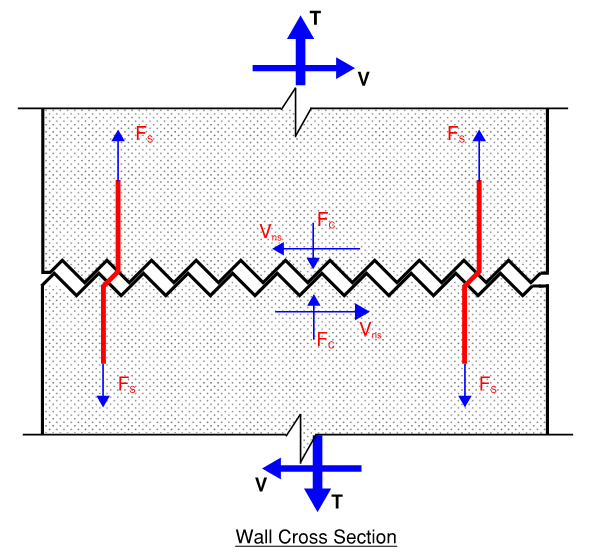 According to ACI 318 Sec 22.9, RISA-3D defines shear strength due to shear friction as:

Notice that some of the rebar, (Atension) is needed to resist the external tensile forces T. As a result, the rebar that can be used for shear friction (Avf) is a portion of the total rebar area As, given by 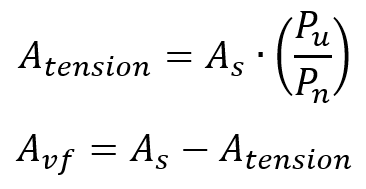 where Pu is the external tensile force, and Pn is the tensile strength of the concrete wall.

In the code check section, the shear strength due to shear friction phi*Vns will be compared with the phi*Vnc calculated using ACI 318 Eqn. (22.5.7.1) with Nu being equal to the external tensile forces:

On thing to note, if there is no axial tension in the wall then phi*Vns = 0 and shear friction will not be considered. The intention is to only use shear friction when needed for a case where the wall is loaded in tension and can produce a very small phi*Vnc value.

The new ACI 318-19 code has been implemented into RISA-3D v19, RISAFloor v15, and RISAFoundation v13. One of the biggest changes between the ACI 318-14 code and the ACI 318-19 code is the shear contribution provided by the concrete, Vc. ACI 318-14 In ACI 318-14, a simplified equation for the calculation of Vc could be used unless there is axial force present in the member. The area of shear and flexural reinforcement in the cross section was not a consideration when determining the shear strength contribution of concrete using the simplified equation. ACI 318-19 Now, in ACI-318-19, the calculation of Vc is dependent on whether the area of shear reinforcement provided, Av, is lesser or greater than the minimum area of shear reinforcement required, Av,min. When Av > Av,min, the axial load and the flexural reinforcement ratio are included in the calculation of Vc. ACI allows us to use the larger of the results from equation (a) and (b) in the table. In RISA-3D detail report, this calculation will be presented in the shear design tab: When Av < Av,min, ACI 318-19 introduces a new variable, the size effect modification factor, λs. Experimental tests have indicated that the shear strength…

With the recent release of RISA-3D v17 the program now offers the user the option to use Chord Straps between floors of a wood shear wall building in lieu of using hold downs. Chord Straps are a great option for transferring tension load between floors of a multi-floor building and can be installed without accessing the inner framing of your shear wall. In RISA-3D the program allows the application of chord straps the same way one would apply hold downs, but with a different tool. This new tool is placed right next to the hold down tool in the Wall Panel Editor. To select what chord strap schedule you would like the program to design from, there is an option in the Wall Panel Design Rules spreadsheet right next to the hold down schedule. Currently you can choose to design your straps based on a database of Simpson Strong-Tie chord straps that includes their CMST, CS, MST, and HST products. Results will be similar to using hold downs, but will now show a strap on the exterior face of the Cross Sectional Detailing section of your wall’s region specific Detail Report. Results will also be specific to the strap that…