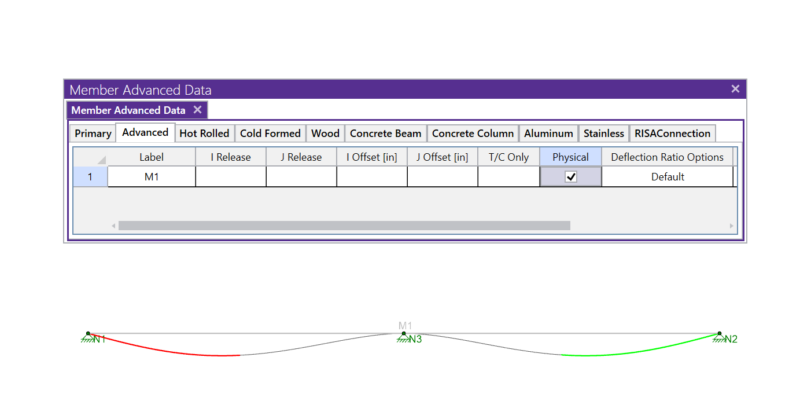 What Are Physical Members?

Members (beams, columns, braces, etc.) are defined in RISA by an I-Node and a J-Node. While you and I see a beam occupying physical space between two columns, most programs see a line between Point I and Point J. This is known as a non-physical member. See the image below:

This has always been an issue for Finite Element Analysis programs which don’t support Physical Members. These programs recommend that you model the beam shown above as two beams:

While splitting the beam into two will give you correct analytical results, it also means that you have twice as many results to sift through for one continuous member. Instead, RISA offers the ability to define the member as Physical, which means that it will recognize and automatically connect to any joint which falls along its length.

Why Are The Steel Beam Deflections So Large?

RISA has now incorporated the tapered member design provisions from Steel Design Guide 25: Frame Design Using Web-Tapered Members written by Richard Kaehler, Don White and Yoon Kuk Kim. These code checking procedures are used whenever the AISC 13th or 14th edition steel codes are selected. No special modeling is required inside of RISA-3D. Just create the tapered members, assign design parameters and designate the AISC 13th or 14th edition as the design code, then RISA-3D will give you analysis and design results for your frame. History of Tapered Member Design in RISA Older versions of the AISC code (ASD 9th and LRFD 3rd) used to have specifications in Appendix F detailing how to perform member design of web tapered members. RISA incorporated these design provisions directly into the program’s code checking procedures. With the 2005 release of the unified AISC 13th edition steel specification, AISC removed all design provisions for these types of web tapered members. Between the publication of the 13th edition steel code and the publication of Design Guide 25, RISA (and the design community as a whole) lacked clear guidance over how these members should be designed. Therefore, versions of RISA-3D prior to version 11.0 were…

RISA-3D v15 includes "analysis offsets" which moves the centroid of the member for analysis allowing for flexibility in how members are designed. Let's use a WT brace to demonstrate how this feature can be utilized. When you model a WT brace it exists at the member centroid, which means that no bending ends up in the brace due to the fact that the brace is actually eccentric to the braced frame. Recently, we've added a feature called “Analysis Offset” which moves the centroid of the member for analysis. In the example below the flange of the WT is bolted to a gusset that is ¾” thick, so we would want the centroid to be moved to the face of the flange, plus half the gusset thickness (3/8”): With this offset applied, when the model is solved you’ll note that the brace bows out of plane, indicating that it does have bending. The detail report confirms this. Note how much the Code Check value increases when the real-life bending due to eccentricity is considered in the RISA model…