How Do Plates Connect to Members?

In order to understand the interaction between plates and members it is important that you know the basics of Physical Members and Plate Connectivity. Remember that plates only connect to other elements at their corners, and you will instantly recognize why the model below will not work as intended. 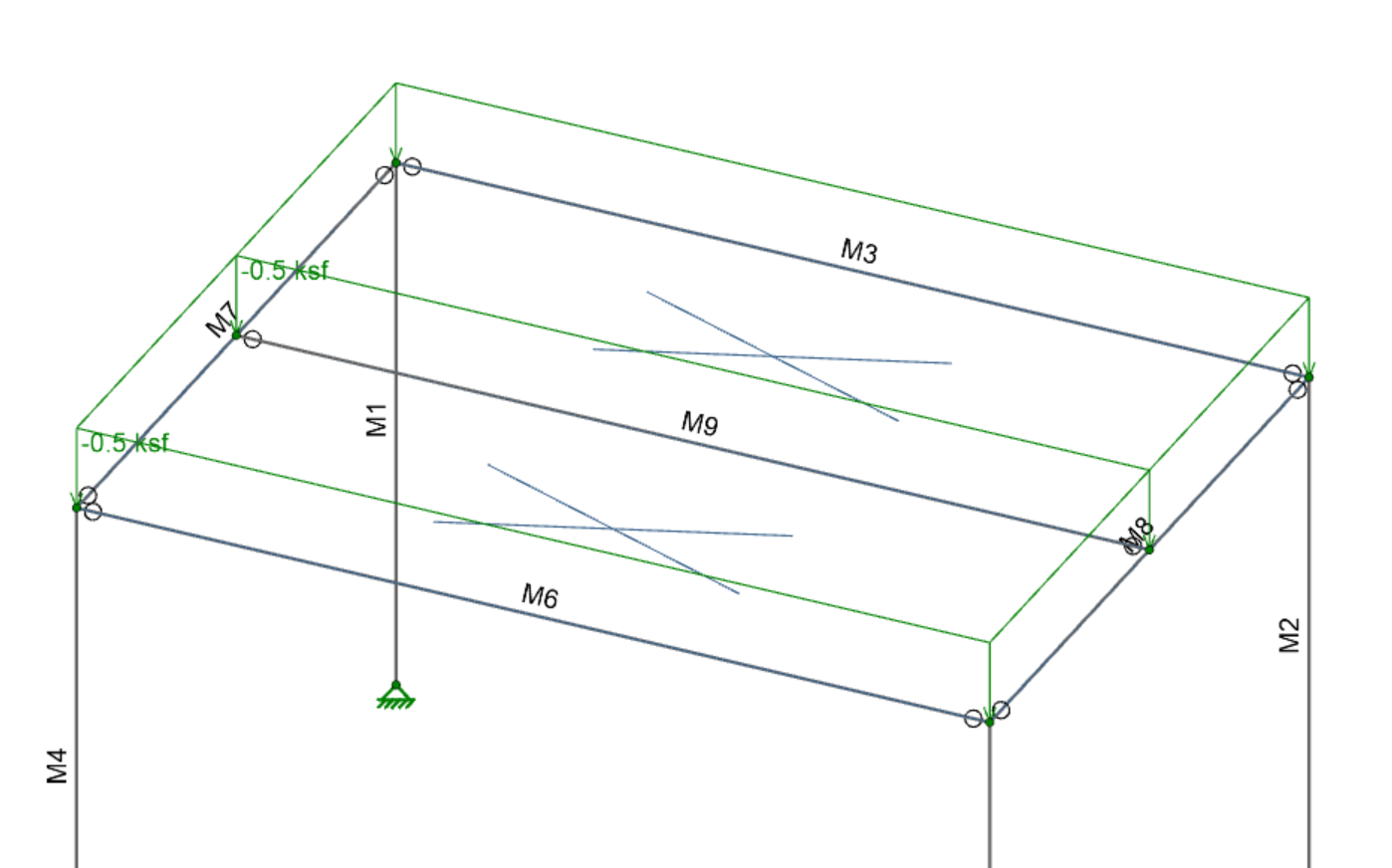 In this model there are two plates, defined between members M2, M5, and M9. The moment in all three beams is zero though, because the surface load on the plates goes to their corners, which fall only on the girders and the columns. In order to get a more realistic one-way load distribution to the beams the plates actually need to connect to them (since plates do not connect to anything along their edges).

Above is a submeshed model. The moment diagram for member M9 is plotted on the right. As you can see, the plates are only connected to that member at its midspan, so it is being loaded with a single point load right in the middle. This is not realistic for how a slab would load this beam though, and is therefore an inadequate mesh. In order to get that realistic loading we need enough connection points between the plates and the members. The mesh shown below has adequate connectivity, and this is illustrated by a roughly parabolic moment diagram for M9.

What Are Physical Members?

Members (beams, columns, braces, etc.) are defined in RISA by an I-Node and a J-Node. While you and I see a beam occupying physical space between two columns, most programs see a line between Point I and Point J. This is known as a non-physical member. See the image below: In this model the red side of the beam is the I-End (Node N1) and the blue side of the beam is the J-End (Node N2). There is clearly a midspan support, but this member is only defined with two joints, and it is not defined as “physical”, so the program is unaware that Node N3 is connected to the member. As a result, when the model is solved we get this deflection: This has always been an issue for Finite Element Analysis programs which don’t support Physical Members. These programs recommend that you model the beam shown above as two beams: While splitting the beam into two will give you correct analytical results, it also means that you have twice as many results to sift through for one continuous member. Instead, RISA offers the ability to define the member as Physical, which means that it will recognize and automatically…

Why Are The Steel Beam Deflections So Large?

When a model is loaded, it deflects. The deflections in the members of the model may induce secondary moments due to the fact that the ends of the member may no longer be vertical in the deflected position. These secondary effects for members can be accurately approximated through the use of P-Delta analysis. This type of analysis is called “P-Delta” because the magnitude of the secondary moment is equal to “P”, the axial force in the member, times “Delta”, the distance one end of the member is offset from the other end. Step 1: The model is loaded with the Applied loads (P shown above) Step 2: The model deflects Δ, and the secondary shear force (V) is calculated for every member; Step 3: The model is re-solved (internally) with the secondary shear forces applied (V shown above). Step 4: The displacements for this new solution are compared to those obtained from the previous solution. If they fall within the convergence tolerance, the solution has converged. If not, return to Step 2 and repeat. The convergence tolerance is found in the Model Settings and is set by default to 05%…