The most recent release of AISC 360-16 (15th Edition) includes changes to connection design for rectangular HSS shapes with applied concentrated forces. These changes are now included in RISAConnection v10.

Prior to the release of the AISC 360-16 (15th Edition) the design of rectangular HSS shapes with concentrated forces was governed by Specification Section K2.3 as well as Table K1.2. Table K1.2 outlines various limit states that were specifically required for these types of connections. 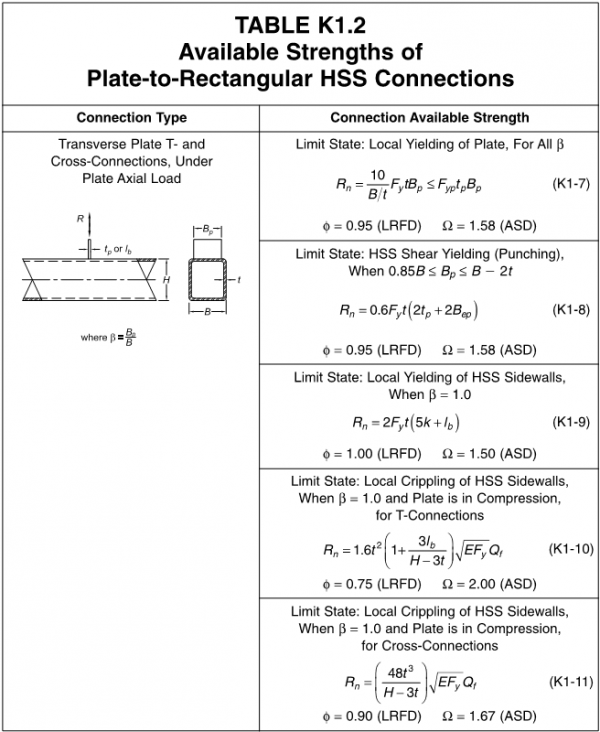 In RISAConnection, these checks are included for the following connections that are designed with AISC 360-10 and AISC 360-05: 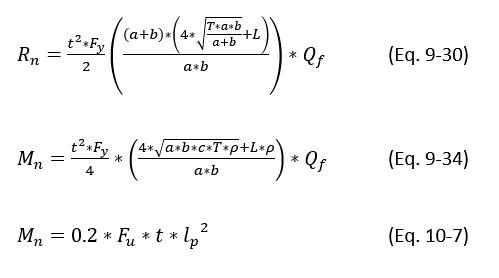 Out of Plane Design Checks on Column Web Connections

The AISC 360-16 (15th edition) has added a new section (see page 9-14 through 9-17) that gives direction on how to check the out-of-plane loading on the webs of wide flange columns which are subject to axial and/or bending loads. This applies to shear tabs, double angles and gusset plates attached to wide flange column webs. RISAConnection v10 now incorporates these changes as required by the code for the following connection types: Shear: Column to Beam Clip Angle (One Side) Shear Column to Beam End Plate Shear Column to Beam Shear Tab Shear Brace: Vertical Diagonal Brace – Gusset to Column Vertical Diagonal Brace – Beam to Column Knee Brace In the case of moment connections, if the plate connects to the column web, there are transverse stiffeners on the opposite side of the column that are required and prevent out of plane bending. If the plate does not connect to the column web, then there is no axial load present in the column web. For each shear and brace connection where the out-of-plane web checks are required, the following limit states are now included: Column Web Punching Shear Column Web Axial Yielding Column Web Flexural Yielding HSS Transverse Plastification…

Connection design according to the new AISC 360-16 (15th Ed.) Steel Manual has now been implemented in RISAConnection. To select this code for your design, simply choose either LRFD or ASD from the Solution tab within the Global Project Settings. The addition of the new 15th Edition code, includes the following updates/changes from the previous 14th Edition: New materials for members and plates per section A3.1a Updated available bolt materials per section A3.3 Updated nominal hole dimensions per Table J3.3 New out of plane yielding checks for column web connections Updated the HSS connection checks per the revised Chapter K tables (for more information see the RISANews article, Updates to HSS Connections) To see a full comparison of the revisions made in the 15th Edition code, visit the document on the AISC’s website by clicking the link below: Link: AISC 360-16 vs AISC 360-10…