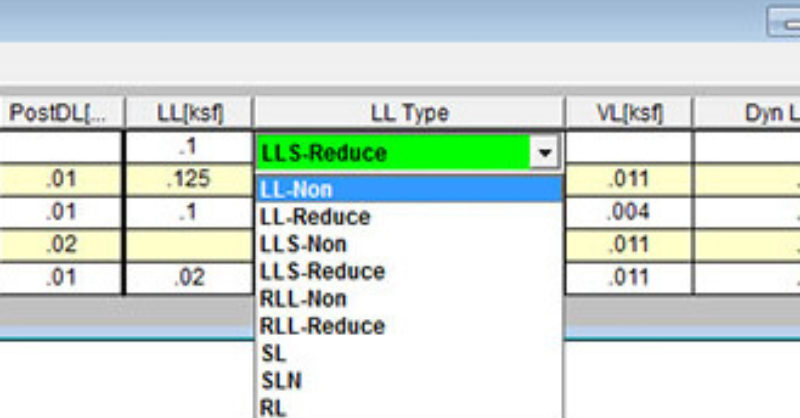 How to use Live Load Special

Live Load Special (LLS) should be used when the loads exceed 100 lb/ft2, there is no live load reduction except when there are multiple stories. This designation should be used for the following cases:

There is live loading associated with Assembly loading (or previously named Special Occupancy Live Loads). Assembly loads should be considered as Live Loads not Live Loads Special. In the ASCE7-10, you cannot reduce assembly live loads so they would be LLS- Non. In IBC 2012, the assembly load is not specified, and the Load Combination (f1=1), so you would need to use LLS-Non.

In the previous years, you could not reduce any loads under 100psf and they could not get the multi-story reduction, so you would want to use LLS-Reduce for 100psf or higher, LLS-Non for loading under 100psf.

RISAFloor v11 allows users to add parapets while allowing the program to calculate the wind loads per the ASCE 7 parapet wind loading requirements. How to add a parapet to your model? The Floors spreadsheet has a parapet height per floor which is the default for the entire floor level. You can then go into the Columns and Wall Panels spreadsheets to customize the height of your parapets around the edges of your roof. For columns, the program will go around the edge of your roof and find the column parapet height at each location. The smaller of the two values between the two columns is the parapet height. Once this is complete you can solve your model and use the Director to go to RISA-3D, where you view the Wind Load Generation dialog. From here you can see the defined geometry and the wind load at each parapet. This load is then lumped in with the regular roof wind load to give a total wind force in each direction…

Basic Code Terms for Seismic Behavior and Why We Use Them

Seismic Forces are generated automatically using seismic parameters R, SD1, and SDS in the Seismic Load Generator when using the Director to go from RISAFloor to RISA-3D or when inserting Seismic Loads on a rigid diaphragm in RISA-3D. Additionally, Seismic Load Combinations can be generated using the seismic parameters ρ, Ωo, and SDS and applied to the structure. These seismic parameters are used to approximate the inelastic response of the structure subjected to seismic design lateral forces. Figure 1 shows a simplified example of what some of the seismic parameters represent when looking at force versus drift for a lateral system. In RISA-3D, the seismic load generator is accessed by selecting the Advanced tab and then clicking on Seismic. When the load generator opens and the loads are calculated the dialogue looks like the image below. R is the Response Modification Factor as defined in Table 12.2-1 of ASCE 7-16. It provides a reduction for the design seismic force based on the ductility of the system. The program offers a single user-input R value in each Global direction. R is used in the calculation of the Seismic Response Coefficient, Cs, which determines the Seismic Base Shear, V, and these values…